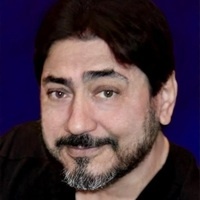 1968-1969 and continued his service at Walter Reed Army Medical Center in Washington D.C. In 1974 moved to Laredo from San Antonio after meeting the love of his life Rosie and were married for 44 years.

In Laredo, TX, he started one of the ﬁrst multitrack, pro-level recording studios; ‘Sound Idea Studios’, where many, including friends, had their albums produced. He started a private label ‘Sativa’, which later became ‘4th Note Media’. He co-founded Texchem Corporation with Rosie and together grew a successful business still operating strong for over 40 years.

His music career began with composing at the age of ten. He later opened for artists such as Trapeze, Santa Esmeralda, Samantha Sang, and Jimi Hendrix. He was an accomplished keyboardist, vocalist, songwriter, arranger, and record producer. He performed with the likes of: 'Mercy Beats', 'Heart', 'The Godfathers', 'Texas Road Apples', 'Kris Bravo Band', 'Laughing Kind', 'Thunderbox', 'Fuse', and 'Ragz'. As a spiritual man, he toured with the likes of Swaggart Ministries, Phil Driscoll, among countless others.

In 2015 He set on a new journey in musical expression with his one-man band ‘Big Dogs Bite’ and initial album ‘First Bite’ which after one month hit over a quarter-million streams. His most recent projects are unreleased.

He studied with Margaret Anderson and Lonnie Smith to learn the intricacies of visual art favoring watercolors and ink mediums. As his time in the arts matured, he found a love for sculpturing wood and stone.

Links to his art and music can be found at: AbelJStudios.com

To order memorial trees or send flowers to the family in memory of Abel Reyes Jr., please visit our flower store.