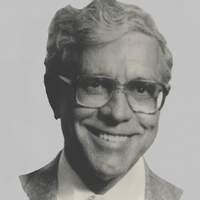 Husband, father, grandfather, uncle, friend, mentor, and inspiration are just some of the roles he occupied to those that lovingly knew him. To his wife, he was a devoted and dedicated husband.

To his sons, he was a guiding force and inspiration that helped shape their lives. To his grandchildren, he was affectionately known as “Nano” and always demonstrated his unconditional love and support for them. To his co-workers, he was a trusted friend and colleague. Last, but not least, to his extended family and friends, he was warm, compassionate, generous, and supportive of their lives and endeavors.

He was born to Adolfo C. de la Garza, Sr. and Maria de Jesus de la Garza, and was the only son of six children. He graduated from Martin High School at the age of 15 as their Salutatorian and graduated Summa cum Laude from Laredo Junior College. Although he passed the Texas Legal Bar Exam he chose to follow a career in finance dedicating 50 years of service to the Tex-Mex Railway Company where he ultimately retired as Secretary-Treasurer. He was the only Hispanic to have that level of responsibility in the railway system in the entire United States at that time.

With four sons, his children’s interests ranged a wide spectrum, but that did not keep him from being an engaged father. Whether rooting from the bleachers or tennis courtside, to attending band performances or piano recitals, he was happy to support his sons in their respective interests. He was generous with his time and talents. Several notable examples include serving as the Treasurer for the Del Mar Little League during the 80’s and establishing the first Boy Scouts of America troop at Mary Help of Christians School.

He considered his greatest accomplishment to be his family with whom he was generous with his love and time. He was a loving and proud husband to Edna with whom he shared a marriage for 56 years. He claimed one of his greatest joys in life was growing old with her. He was equally loving and supportive to his sons, and it is with love and gratitude that they loved him as their father.

Although it is hard to say goodbye, we find comfort in that he is now embraced by our Heavenly Father, is reunited with those that went before him and will be remembered by those who will keep his memory alive.

A funeral service will be held on Monday, May 9. Departure will be at 9:30 A.M. from Hillside Funeral Home to San Agustin Cathedral. A mass of Christian Burial will be celebrated at 10:00 A.M.

Interment will follow to the family plot within the Calvary Catholic Cemetery.

The family would like to thank Dr. Marissa Gonzalez and the Holy Savior Hospice for their assistance in providing medical and nursing services.

Due to the COVID pandemic and everyone’s safety please continue to wear a mask and practice social distancing.  You may express your condolences to the family on our website at www.hillsidefuneral.com