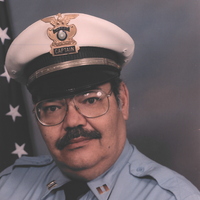 Although he was not born in Texas, he arrived as soon as he could.
Living in Laredo since 1952, Captain Lanier attended St. Joseph's Academy, Lamar Middle, and J.W. Nixon High School, class of 1968. At Nixon High School, he was a cadet in the NDCC (National Defense Cadet Corps), which later became the Reserve Officers' Training Corps (ROTC). In the ROTC program, he rose to the rank of Cadet Captain and was a member of the marksmanship rifle team.
Captain Lanier joined the United States Army shortly after high school, during the height of the Vietnam War. His first military unit was Company C, 2nd Battalion of the 141st Infantry Regiment of the 36th Infantry Brigade of the 49th Armored Division. The 141st was a "light infantry" regiment of which he would be first to say that "there was nothing light about it!" He then transferred to the Armor Corp, becoming a tank commander of the M60 Main Battle Tank system in the 6th Battalion of the 112th Armored Cavalry Regiment of the 49th Armored Division. A unit that was the largest armored force in the world, during the peak of the Cold War.  He later became a founding member of a new Army National Guard unit from Laredo, the 449th Chemical Company of the 49th Armored Division, where he was a "Smoke" Sergeant until his retirement in 1991. In 1997, at the request of Colonel Carlos Garza of the Texas State Guard, Captain Lanier was commissioned as a staff intelligence officer until 2002.
Captain Lanier joined the Laredo Police Department in 1974, promoting to the ranks of Investigator (Detective), Sergeant, Lieutenant, and Patrol Captain. He was a member of the Emergency Response Team of SWAT (Special Weapons and Tactics) Unit, and the Police Olympics Competitive Shooting Team. He was influential in the modernization of the Records Division, Communications Division, and DWI test (breathalyzer) section. In his later years, he was a Detective in the Crimes Against Property (CAPROS) section and an Investigator in the Identification Section.
Captain Lanier was a career-long member of the Laredo Police Officers Association (LPOA) and the Combined Law Enforcement Association of Texas (CLEAT). He was influential in the improvements to officer pay, training, benefits, and safety as well a revitalization of the department in the mid-1990s and the building of the current Laredo Police Headquarters.
Captain Lanier was also a Texas Commission on Law Enforcement (TCOLE) Instructor, Firearms Instructor, FBI Certified Firearms Instructor, and TCOLE Master Peace Officer. He received numerous awards for leadership and Valor to include several meritorious service awards and the Blue Knight Award.
Captain Lanier was also recognized for his years of service by Governor Rick Perry during the 2014 Governor's Star of Texas awards when received by his son, Allen III at the Texas Capitol.
Captain Lanier is survived by his sons, Allen F. Lanier, III, Robert Steven (Ruby) Lanier, several grandchildren, and former spouse, Rosie.
Additionally, he is survived by children Karen and Francisco.
Captain Lanier will long be remembered by numerous friends, too numerous to list. Friends and acquaintances from the Laredo Police Department,  Laredo area law enforcement, the Texas National Guard, Texas State Guard, and the community of Zapata, Tx. He will be dearly missed and fondly remembered.
Thank you - Allen Lanier III
To order memorial trees or send flowers to the family in memory of Allen Frank Lanier, Jr., please visit our flower store.