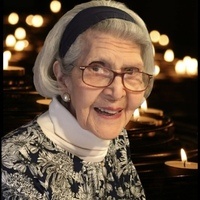 Mrs. Gloria Zapiain returned to the Lord the morning of September 9, 2022.

She is preceded in death by her husband, Joseph Francis Zapiain, and her parents, Ramiro Eugenio de la Garza and Ma. Luisa Salinas de la Garza.

Gloria and Joseph Francis (Paco) were married for 50 years. Gloria graduated from Our Lady of the Lake University in San Antonio with a degree in Business Management and served in a variety of positions, including with Pan American Airlines and in Mexico City as an employment counselor. Gloria was an avid swimmer, and enjoyed gardening and watching championship tennis. She and Paco were active members and volunteers in the Catholic Church, and were among the first to welcome the Community of St. John, a French Order of Priests and Sisters, when they came to Laredo in the early 1990’s.

A rosary will be offered for Mrs. Zapiain on Tuesday, September 13, 2022, at 7:00pm at Hillside Funeral Home chapel, officiated by Fr Victor Shoemaker CSJ and Deacon Joe Longoria. Visitation will be from 6:00pm – 9:00pm.

Visitation at Hillside Funeral Home resumes at 7:00am on Wednesday, September 14. The Funeral procession will leave at 9:30am to St. Patrick Catholic Church. The Mass of Christian Burial will begin at 10:00am, to be concelebrated by Msgr. James Harris and Fr. Victor Shoemaker, CSJ.

Interment will follow in the family plot at Calvary Catholic Cemetery.

Arrangements are under the direction of Hillside Funeral Home, 310 Hillside Road.

To order memorial trees or send flowers to the family in memory of Gloria Laura Zapiain, please visit our flower store.