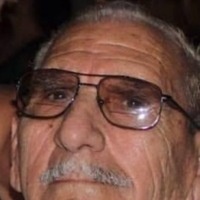 Jose E. Canales, 95, was born into eternal rest and joined our Lord in His Heavenly Kingdom on Saturday, September 4, 2021, surrounded by his beloved family at the hour of his death.

It was during one of those trips the he got engaged to the love of his life, Alma Alicia Chapa Molina from Parás, Nuevo Leon, Mexico. Upon marriage, they settled in Nuevo Laredo, Tamaulipas. For the next 7 years, Pepe would leave his wife and young children in Mexico while he returned to his work in Michigan as an Iron Construction Worker.

In 1958, Pepe became a father when Jose E. Canales, Jr., was born in Nuevo Laredo, Tamps. Pepito as he was nicknamed, was not alone for too long. Soon after, two lovely girls came along to join the Canales’ family. Maria Concepcion “Conchita”, eldest daughter was born followed by the 3rd child, Nancy.

In 1965, his wife and 3 young children, Pepito, Conchita, and Nancy, moved to Detroit, Michigan. In the following years, Sandra, Jaime, and Alma Nelly were born in Illinois and Michigan. Finally, in the 1970s, the youngest, Brenda and Roel were born in Texas.

Pepe and Alma celebrated their 62nd wedding anniversary on January 19, 2021.

Pepe worked as a high-rise Iron Construction Worker for over 40 years. He retired at the age of 62. He was a hard worker, devoted, loving family man. He lived for his family and his beloved wife, Alma. He did everything he could to provide for his family and always instilled in his children the importance of a higher education.

He also enjoyed spending time at his Ranchito “Las Conchitas” and his house in Parás, Nuevo Leon. He loved to raise cattle, built his own corrals and always had a project going on at Las Conchitas. He was a very handy man. Pepe and Alma would drive almost every weekend to Parás, Nuevo Leon on their own until he reached the age of 89. Pepe had an impeccable memory and loved to share detailed stories with his children and grandchildren. He did so with his unique sense of humor.

The family would like to thank Pepe’s physicians and compadres, Drs. Arturo and Laura Garza-Gongora, for their love and friendship and years of caring and medical attention to our father. He was blessed to be in such good hands.

The family will hold a memorial mass to celebrate his life on Friday, September 10, 2021, at 2:00 p.m. at San Martin de Porres Catholic Church in Laredo, Texas.

You may express your condolences to the family on our website at www.hillsidefuneral.com

To order memorial trees or send flowers to the family in memory of Jose E. Canales, please visit our flower store.