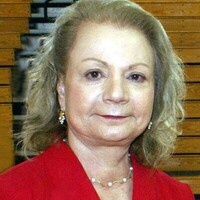 Mrs. Quintanilla was a retired teacher who spent her entire career of thirty-five years teaching at Martin High School. She was a District Coordinator for LISD Campus Crime Stoppers, a position she held since 1994.

Mrs. Quintanilla’s community service for the past twenty-five years has made an impact on Laredo. In the various organizations in which she served, she worked tirelessly to ensure that all students had a chance to apply for and win a scholarship to get a college education so that they may then return to Laredo and help other students become a success. She also dedicated herself to working against crime and drugs which are very prevalent in our community due to its proximity to the Mexican border. Her work as a volunteer member to the Texas Crime Stoppers Teaching and Technical Assistance Work Group along with her volunteer work in the area of the Juvenile Justice System within Laredo was noted at a state level where she was selected to serve on the Juvenile Justice Federal Advisory Committee. Her efforts made such a sizable impact on Laredo, that she was recognized at all levels of our country’s government and awarded several awards including the City of Laredo Volunteer of the Year. She also received recognition from Governor Rick Perry for leading the LISD Crime Stoppers in winning five awards from Crime Stoppers International in one year.

Mrs. Quintanilla is preceded in death by her parents, Manuel G. Ramirez and Guadalupe C. Ramirez.

Estela was married to Manuel Quintanilla Jr., and they had one son David; daughter-in-law, Judith. They are also proud grandparents of Nicholas David and Lauren Rose of Sugarland, Texas.

Interment will follow to the family plot of the Calvary Catholic Cemetery.

Due to ongoing COVID-19, the family kindly asks all those wishing to express condolences in person to wear face masks and maintain social distancing orders. In accordance with the city ordinance, the number of visitors will be limited. We continue to ask that those at risk or those not feeling well stay home and reach out to the family through our website www.hillsidefuneral.com.

Arrangements are under the direction of Hillside Funeral Home, 310 Hillside Road.

To order memorial trees or send flowers to the family in memory of Maria Estela Quintanilla, please visit our flower store.