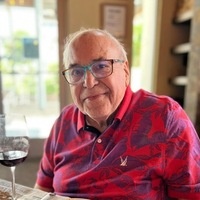 Rafael Ramirez, Jr., 85, the second child and first-born son of Rafael Ramirez, Sr. and Adelaida Ramirez, entered the loving embrace of our Lord on Monday, August 22, 2022.

Well known in his beloved community of Laredo as “Chacho,” he was a loving husband, father, grandfather, brother, uncle, eternal music lover and the most loyal and jovial of friends, Mr.  Ramirez left this earth to joyfully reunite with his beloved wife, “Nina,” Graciela C. Ramirez, who passed away in 2019.

In his storied and amazing life and career, Mr. Ramirez lived to the fullest.  His experiences as a master trumpet player, a United States Army Reservist, a loving family man, advertising executive, business owner, teacher (he was part of the inaugural faculty at J.W. Nixon High School) and published author brought him much joy and pride.

Born in Hebbronville, Texas, he was a proud son of his beloved hometown.  Later in life, as he recovered from a severe stroke, he wrote and published two books covering the history of his city entitled, “Thoughts and Sentiments of Hebbronville, Books 1 and 2.”

His amazing skill and talent playing the trumpet led him to leading the Hebbronville High School band as drum major while he was still in middle school.  This love of music burned bright for the rest of his life, as he also nurtured this passion by playing with the Valdez Brothers in the 1950’s and ‘60’s, and with the Laredo Symphony, LCC Orchestra and recording music with his brothers.

Among his most notable accomplishments besides his musical adventures are cultivating his talent for advertising at the Laredo Morning Times, at Laredo’s iconic Hachar Department Store, and finally with the opening of his own advertising business, RADCO (Ramirez Advertising Company).  As an educator at Laredo Community College (now LC) where he taught Business courses and sponsored the campus newspaper for a time, Mr. Ramirez touched many lives and is fondly remembered to this day by generations of Laredoans.

While in college, Mr. Ramirez met the love of his life, Graciela Chavez Ramirez, whom he married in 1960. Together, they embarked on a 59-year love affair that will remain alive forever in the hearts of all who knew them. Together, they made life-long memories filled with love and endless laughter as they also nurtured life-long friendships. They welcomed only daughter Cynthia “Cyndee” Michelle in 1961 and remained devoted parents for the rest of their lives.

As his extended family can attest, Mr. Ramirez was always there - always. Every birthday, holiday, family trip, hospital visit or special celebration; he and his “Nina” were there.  Even after his debilitating stroke, he continued these traditions as well as continuing to travel as much as he could, thanks to his daughter-in-law, Mary.

Later in life, he was delighted to spend his time with his grandson, Ryan. His days revolved around seeing him off to school, waiting for Ryan at the dining table to talk about his day, and plotting and executing countless shenanigans together.  To his last day, his world revolved around making plans to travel with his family to show Ryan his favorite places.  Ryan will miss him terribly.

Much gratitude also goes to his physicians Dr. Arturo Garza-Gongora and Dr. Laura Garza-Gongora, and Dr. Marc Feldman, as well as to his caregivers, Mine, Mirta, and Itzelle.

Mass will be celebrated on Friday, August 26, 2022, at St. Patrick Catholic Church at 9:00 A.M. All that will be attending are asked to gather at the church half hour before the start of the service. There will be no procession.

Rite of Committal and Interment will be held privately at a later date. All services will conclude at the church.

Honorary pallbearers will be Ryan Rene Ramirez and Kiko Treviño.

You may extend your condolences, share a story, or words of comfort to the family on his virtual obituary found at www.hillsidefuneral.com

To order memorial trees or send flowers to the family in memory of Rafael Ramirez, Jr., please visit our flower store.